When you think of solar energy, what’s the first thing that comes to your mind? It might be saving money on your electric bill, becoming energy independent, or its environmental friendliness. But it also might stir other feelings as well. And some of those feelings might be related to its perceived status as a political issue.

Solar energy, like politics, can be quite a polarizing topic. But at KC Solar, we challenge that assumption. Solar energy can be for everyone, no matter your political affiliation. And we’re here to explain why solar energy isn’t a political issue after all.

Solar energy can be a solution to many problems. It can help homeowners save money on electricity, reduce their tax burdens, and even help increase their home’s value. But to find out why solar energy seems like it’s a political issue, we have to look at one of the main reasons solar energy became popular in the first place: its environmental impact.

If you pay any attention to the news, solar energy certainly does seem like a political issue through this lens. For instance, former president Donald Trump, a Republican, was widely considered to be a climate change denier. On the other hand, current president Joe Biden, a Democrat, has stated that “climate change is the number one issue facing humanity.” For many people, their feelings about climate change may be split along party lines. 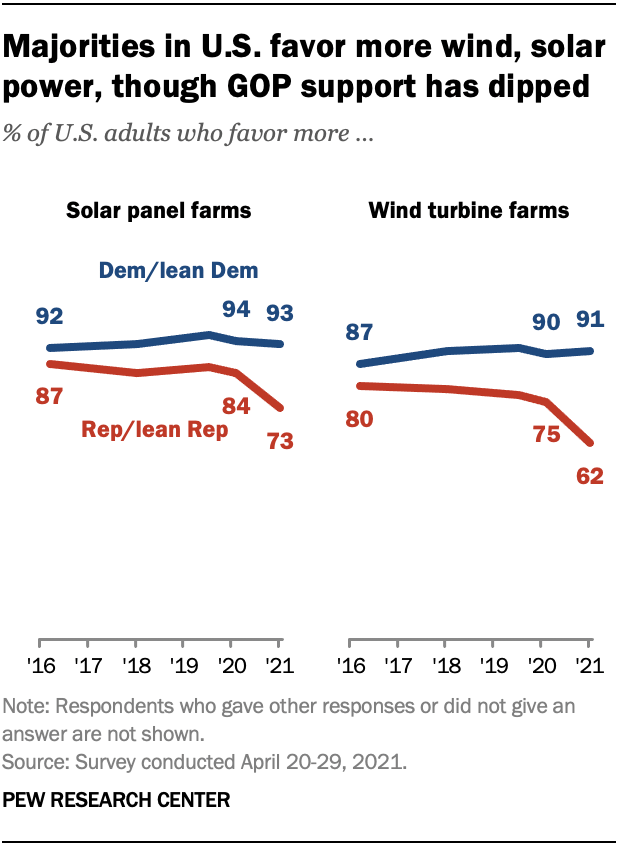 Of course, this isn’t the case for everyone. But a poll by Pew Research does show a noticeable split in the number of Democrats and the number of Republicans who favor expanding renewable energies, including solar and wind power. In fact, Republican support has dropped considerably from its previous levels during the past five years, widening the gap between the parties.

A recent article in the Wall Street Journal, “Solar Power Booms in Georgia, Where It Isn’t Mandated,” explored the flourishing solar industry in a state that has voted for the Republican presidential nominee every election from 1996 through 2016.

Unlike other states — including Democratic-majority states California, Colorado, and New York, Georgia does not have mandates that are powering this solar boom. According to the WSJ, Republican regulators are encouraging Georgia’s major utility company to invest in solar — not for environmental reasons, but for economic ones.

Tim Echols, a regulator who serves on the elected, all-Republican public service commission, put it this way in the WSJ article:

“Don’t come into my office talking about climate change or the environment. Talk about new jobs, talk about low-cost energy, talk about reduction of transmission lines.”

The Impact of Solar in “Red” States

While there are no mandates, the price of solar energy installation in Georgia has fallen 36% in the past five years, according to data by the Solar Energy Industries Association. This is on par with the falling prices of solar throughout the rest of the country over a similar timeframe.

And “speaking Republican” has certainly contributed to solar’s success in the state. Now, Georgia state regulators aren’t the only ones who are seeing the benefits of solar energy. According to the WSJ article, even local GOP political groups are advocating for expanding residential solar in the state. These include groups such as Conservatives for Clean Energy Georgia and the Atlanta Tea Party Patriots.

The Undeniable Economic Benefits of Solar

If Georgia, a traditionally Republican state, can be one of the most solar-savvy states in the country, there’s no excuse why other states shouldn’t get on board — especially if their main deterrent is the fear of looking too liberal. That’s because solar energy isn’t a political issue.

Even removing the issue of climate change from the equation, many states and countries around the world are finding the economic benefits of solar are more than enough to justify their use. Especially within their own local communities.

It turns out that even when a small portion of a community goes solar, the benefits can extend far and wide on an exponentially larger scale. Consider a study published in early December 2020 by Vote Solar, the Coalition for Community Solar Access, and solar provider Sunrun. The study found that, if just one-quarter of U.S. households were powered by local rooftop and community solar and storage, Americans would benefit financially. In fact, the U.S. could save billions of dollars annually.

In particular, the published report included the following finding:

“The cost analysis accounted for direct costs and benefits only, but local solar and storage brings additional societal benefits to communities such as jobs, increased economic development, increased resilience, and more equitable access to the benefits of renewables.”