Days after Election Day 2020, the results became clear: Joe Biden will be the 46th President of the United States, unseating the incumbent President Donald Trump. After four years, Americans can expect several changes from the upcoming administration. And one of those changes will be Joe Biden’s energy plans.

While Biden won’t be inaugurated until January 2021, we already know a lot about his plans. He’s made his intentions quite clear. In many cases, they were part of his presidential campaign platform. Unlike President Trump, who is generally considered a climate change denier, Biden has stated that climate change is the “number one issue facing humanity.” In fact, this could have led to his popularity among Millennial and Generation Z voters, who are more likely than older generations to be highly concerned about climate change.

Keep reading to learn more about how the future of solar and other green energy could be impacted by the 2020 election results.

Environmental Policies of the Past Four Years

No matter your politics, it’s undeniable that the Trump administration has scaled back environmental protections and efforts to curb the effects of climate change over the past four years. This trend became clear starting on Inauguration Day 2017 — the day President Trump officially took office. On that day, nearly all mentions of the phrase “climate change” were dropped from the White House official website.

With one exception: A vow to eliminate the Barack Obama administration’s climate change policies.

It’s not hard to see where this would end up going.

Over the past four years, President Trump has kept his promises regarding the rollback of environmental protection policies. Several months after assuming office, Trump announced the United States’ withdrawal from the Paris Agreement.

“The Paris Agreement central aim is to strengthen the global response to the threat of climate change by keeping a global temperature rise this century well below 2 degrees Celsius above pre-industrial levels and to pursue efforts to limit the temperature increase even further to 1.5 degrees Celsius. Additionally, the agreement aims to strengthen the ability of countries to deal with the impacts of climate change.” — United Nations Framework Convention on Climate Change

As of 2018, the United States was the only country out of 197 recognized nations that had not ratified the Paris Agreement. The U.S. officially left the agreement on November 4, one day after Election Day 2020. And — as promised — Trump dismantled Obama’s Clean Power Plan, which required the energy sector to decrease carbon emissions by 2030. In October 2017, it was rolled back due to a “war on coal” among other stated reasons.

These examples represent only a few of the widespread and far-reaching cuts to the established U.S. and international climate change mitigation efforts.

Read more from National Geographic about how the Trump administration has changed environmental policies over the past several years.

Renewable Energy Under the Trump Administration

President Trump’s apparent disregard for climate protection policies extends to many of the technologies that provide opportunities for a greener future, such as wind and solar. When it comes to wind energy, for example, Trump has stated that the noise from wind turbines “causes cancer.” There is no evidence to back up this claim.

Now, let’s take a look at where we’re most concerned: solar energy.

Unfortunately, President Trump appears to be no fan of solar energy. In July 2019 — in what was called the “biggest blow he’s dealt to renewable energy yet” — Trump imposed a tariff of up to 30% on imported solar panels. According to Time, this move was projected to negatively impact the American solar energy industry, which relied on parts manufactured abroad for 80% of its supply.

And not only this. Daniel Simmons, appointed by President Trump for the Department of Energy’s Assistant Secretary for Energy Efficiency and Renewable Energy, does not seem to be a renewable energy supporter. In fact, there’s evidence that he’s systematically burying dozens of government studies detailing the promises of renewable energy sources. In all, the department has blocked more than 40 clean energy studies.

“The department has replaced them with mere presentations, buried them in scientific journals that are not accessible to the public, or left them paralyzed within the agency, according to emails and documents obtained by InvestigateWest, as well as interviews with more than a dozen current and former employees at the Department of Energy, or DOE, and its national labs.” — Grist.org

Need evidence that President-elect Joe Biden is planning a different approach to environmental issues? Look no further than his promise to rejoin the Paris Agreement on Day 1 of his presidency. Biden shared this vow in a tweet reacting to the United States’ official exit from the international climate change accord. 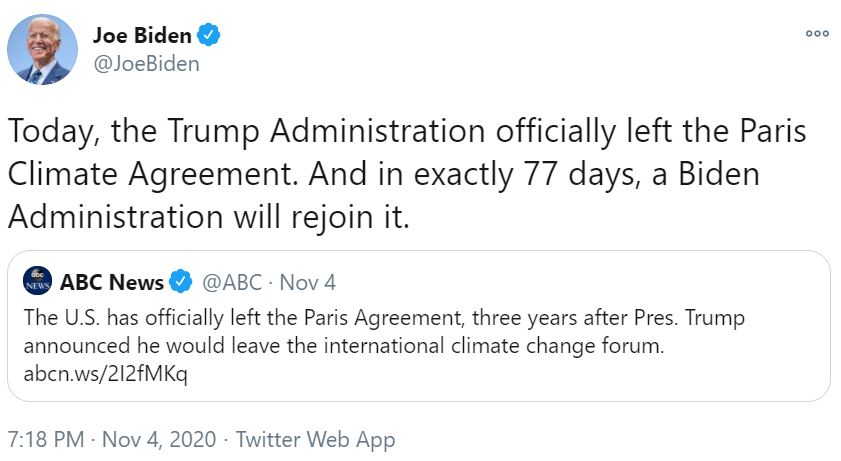 Biden’s campaign website affirmed his commitment to tackle climate change through “The Biden Plan for a Clean Energy Revolution and Environmental Justice.” And his recently launched transition website, Build Back Better, lists climate change as one of his administration’s four main priorities as soon as he and Vice President-elect Kamala Harris take office in January.

“I know that climate change is the challenge that’s going to define our American future — and I know meeting this challenge will be a once-in-a-century opportunity to jolt new life into our economy, strengthen our global leadership, and protect our planet for future generations.” — Joe Biden

When it comes to renewable energy specifically, one of Biden’s proposed investments is in the power sector: “Move ambitiously to generate clean, American-made electricity to achieve a carbon pollution-free power sector by 2035. This will enable us to meet the existential threat of climate change while creating millions of jobs with a choice to join a union.”

This refers to part of the “Biden plan” for renewable energy — a $2 trillion proposal that will, over four years, work toward clean energy and infrastructure while moving the U.S. toward a carbon-free future.

While it may not match the famed Green New Deal, Biden’s team has deliberately sought to collaborate with progressive groups such as the Biden-Sanders Unity Task Force. This has ensured that the Biden team is consulting with climate change activists like the Sunrise Movement — an integral part of designing the Green New Deal. Together, the groups have helped the President-elect design the Biden plan.

Environmental experts and members of the Unity Task Force have praised Biden’s embrace of progressive environmental policies in the Biden plan. No matter how it all shakes out after Inauguration Day 2021, it’s clear that Americans can expect a stark change in how the Biden administration plans to handle the challenges of climate change.